Neutral
Domains: Language, trickery, humor, illusion, knowledge, travel
Favored Weapon: Dart
Symbol: Golden firefly
Worshipers: Cynics, jesters, wanderers, illusionists, road scholars
Priestly Boon: Once per day, ungovernable hideous laughter. As the spell, but broken if target creature is attacked or harmed by the priest or his allies. At 12th level, once per day the priest may teleport as spell, though the destination must be familiar to the priest.

The Laughing God, The Traveler, The Imp of Idolum

A small and grotesque fey creature of tremendous power, Yuckla is the god of laughter, deemed to exert a beneficent and somewhat protective influence. Said to be able to reshape the very fabric of the world on a whim, his appearance is like a boggart or will-o'-wisp. He is known for his capacity as a trickster god mixing caprice and mischief in god-like capacity. He is unpredictable, sly, and fond of pranks that can be cruel and disruptive but most often favor those of good humor, especially travelers.

The Laughing God has no permanent abode. He wanders freely through the lands, bending reality and changing lives wherever he goes. His sense of humor is vast, both in its breadth and its potential for harm. The Imp of Idolum is believed by some mortals to be the progenitor of unlikely creatures such as boggarts, quicklings, and mephits, but the deity derisively laughs off such claims.

Mainly known in YOROS and TASUUN. Many fringe cults of this deity exist. His shrines, unattended, could be found by the roadside in Tasuun. Worshipers sometimes sought his favor by pouring a libation of wine upon his altar.

"They had brought with them from Miraab a wineskin filled with the fervent ruby wine of Yoros; and though the skin was now three-fourths empty, they poured a libation in the twilight on the broken altar, and prayed to Yuckla for such protection as he might give them against the demons of the night."—The Weaver in the Vault, CAS 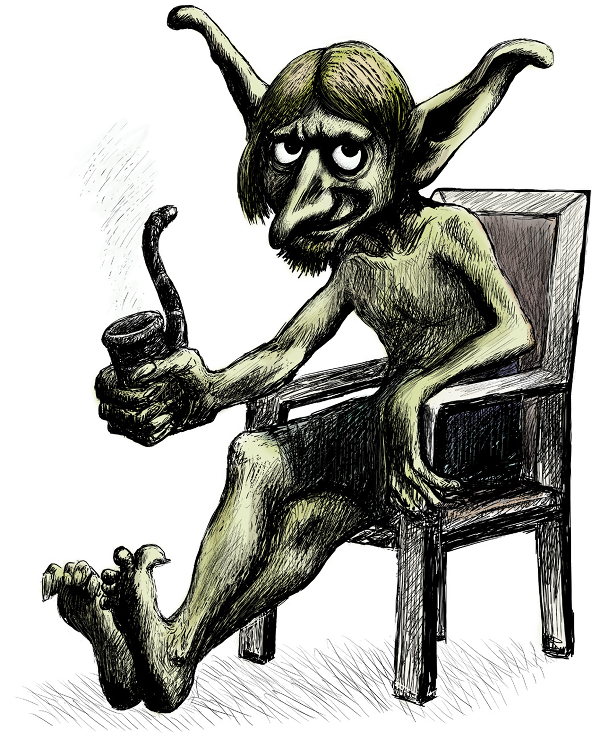