The Sleeper Beneath the Sands, The Key and the Gate, The Most Ancient and Prolonged of Life

Yot-Amir appears as a cloaked, humanoid figure, with no organs or features discernible under his garb—save for a foaming mass of bubbles and tentacles extending from below. Some say Yot-Amir dwells in the black gulfs between the stars, others claim he sleeps in a sealed and forbidden tomb buried in the desert sands. Yot-Amir is one of the Old Ones. The nomads hear his voice in the howling of the wasteland winds, and they see his face in the darkness of outer space. He is emptiness, hunger and thirst for starry wisdom and insight that leads to madness.

According to the scrivenings of madmen and the treatises of philosophers, the outer dark is not so much a location as a thing that connects all places and possibilities. These texts suggest that this it is conscious—that it is aware. Yot-Amir. He has great power over time and space, and can exist at multiple times and realities.

Isolated and often insane, alchemists, sorcerers, and wizards worship Yot-Amir, seeking eldritch secrets and hoping that he will reveal mysteries to them. Other common worshipers are wasteland mutants and witches. Yot-Amir’s disciples believe he is preparing the many worlds of the universe for a new age, during which the inhabitants will be wiped out to make way for the true masters. Cults often call upon Yot-Amir to bless unborn children, turning them into gibbering hybrids that help to prepare the unsuspecting world for the time when the stars themselves shall be right.

“And while there are those,” the mad Arab had written, “who have dared to seek glimpses beyond the Veil, and to accept HIM as a Guide, they would have been more prudent had they avoided commerce with HIM; for it is written in the Book of Thoth how terrific is the price of a single glimpse. Nor may those who pass ever return, for in the Vastnesses transcending our world are Shapes of darkness that seize and bind. The Affair that shambleth about in the night, the Evil that defieth the Elder Sign, the Herd that stand watch at the secret portal each tomb is known to have, and that thrive on that which groweth out of the tenants within—all these Blacknesses are lesser than HE Who guardeth the Gateway; HE Who will guide the rash one beyond all the worlds into the Abyss of unnamable Devourers. For HE is’UMR AT-TAWIL, the Most Ancient One, which the scribe rendereth as THE PROLONGED OF LIFE.”—Through the Gates of the Silver Key, HP Lovecraft and E Hoffman Price 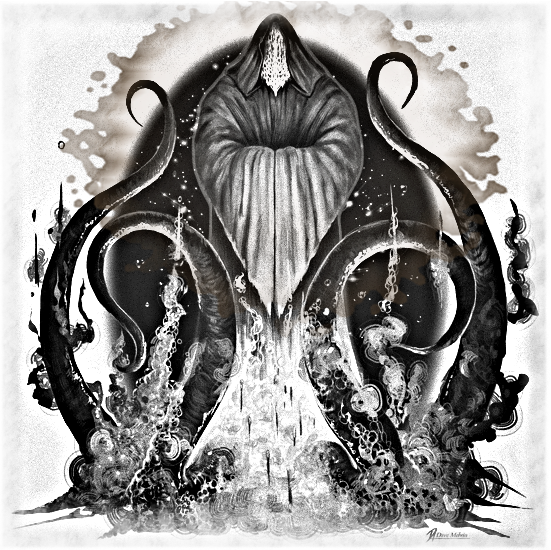