The Unbegotten Source, The Primal Pus, The Demi-Urge

In the deepest reaches of every world lie vast caverns that, in most cases, have been long forgotten or simply never discovered by that world’s inhabitants. It is in these forgotten midnight grottoes that Ubzoth, the Source of Uncleanness, the Primal Pus, seeps and clots and spews forth its aberrant spawn. Ubzoth appears as a vast lake of seething, surging, protoplasmic ooze in which eyes and mouths and limbs and organs constantly form and are consumed. Those creations that drip from its bulk gain sentience of their own, and through them Ubzoth can see and explore and infect any world they touch.

The Primal Pus has an otherworldly wisdom and a staggering intellect, yet it does not devote its mind to matters that mortals could comprehend. It’s not so much trapped as it is cradled in a cavern lair connected to many worlds. The creatures it constantly spawns that manage to escape its ravenous gluttony and eternal hunger stagger upward through the nighted ways, growing stronger and larger the longer they survive. The greatest find paths through ancient portals in those caves to other worlds, where they may spawn entire societies and races of their own. Ubzoth’s cultists maintain that all life in the universe was spawned by the Unbegotten Source, and that in our flesh and bones lie traces of its divine excretions. Ubzoth is destined to someday reabsorb all living things on Earth.

Ubzoth guards a set of stone tablets believed to contain the ultimate knowledge of the "Elder Gods." It is suggested by sorcerers that these slabs provide information on the creation of life. Some imagine that they hold the salvation of humanity, possibly through terraforming.

"For Ubbo-Sathla is the source and the end. Before the coming of Zhothaqquah or Yok-Zothoth or Kthulhut from the stars, Ubbo-Sathla dwelt in the steaming fens of the newmade Earth: a mass without head or members, spawning the grey, formless efts of the prime and the grisly prototypes of terrene life . . . And all earthly life, it is told, shall go back at last through the great circle of time to Ubbo-Sathla." (The Book of Eibon)— Ubbo-Sathla, CAS 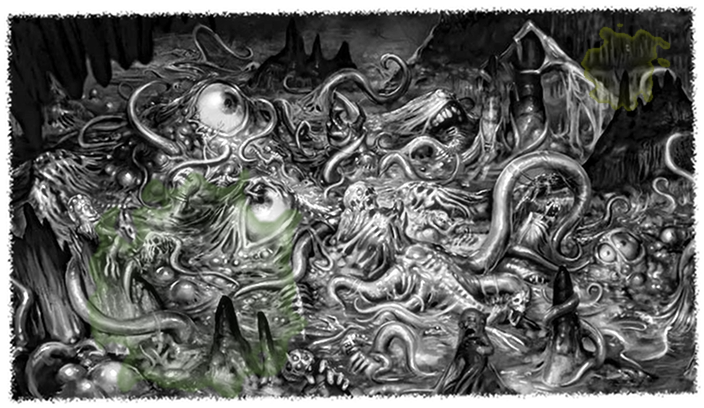