Dark Archfiend, The God of Evil, Prince of All Turpitudes

Of the less licit deities and demons known in Zothique, Thasaidon "black god of evil", "the archfiend", "lord of the seven hells beneath the earth" is the chief. He appears as a majestic, seven-foot-tall figure with rust-red skin, four horns, and a burning crown. Oft he is depicted in graven ceremonial armor, a fur-trimmed robe, wielding a spiky mace; and sitting on a "throne of ever-burning brass."

Worshiped from the western city-states to the eastern islands, Thasaidon gives help and power to those who put themselves at his service. Thasaidon is generous with his power, because he knows that power corrupts. He gave aid to the ancient king OSSARU who dominated half of Zothique; he aided the sorcerer NAMHIRRA in his projects, until he projected the destruction of XYLAC; he lent his power to XEETHRA, in whom the spirit of the long-dead King AMERO was revived, and allowed him to restore the kingdom of CALYZ, for a time, to its former glory.

Thasaidon is known and feared throughout Zothique, even where he is not worshiped. The vampires, divs, and lamiae pay him homage, and wizened liches draw upon his power for continued earthly presence beyond the grave. Typical clerics will be power-hungry bureaucrats.

Thasaidon, lord of seven hells
Wherein the single Serpent dwells,
With volumes drawn from pit to pit
Through fire and darkness infinite —
Thasaidon, sun of nether skies,
Thine ancient evil never dies,
For aye thy somber fulgors flame
On sunken worlds that have no name,
Man's heart enthrones thee, still supreme,
Though the false sorcerers blaspheme.
-- The Song of Xeethra 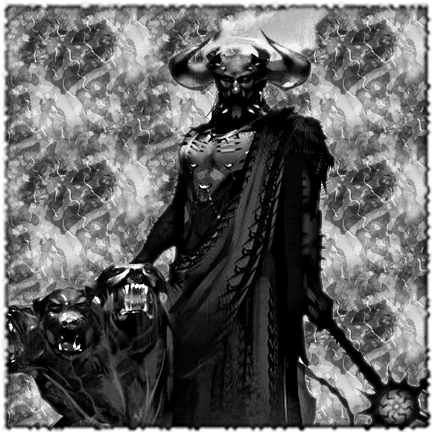