Lawful
Domains: Contemplation, healing, forgiveness, protection, salvation, peace, shepherds
Favored Weapon: Crook (hooked quarterstaff)
Symbol: Curled swastika amid three rings
Worshipers: Ascetics, conflicted, redeemed evildoers; martial artists, retired warriors, strayed paladins
Priestly Boons: At 1st level, sanctuary, if known, can affect in addition to the priest one ally within 5'. They must remain within 5' and neither subject may take offensive actions without breaking the spell for both priest and subject. The spell otherwise conforms in all ways to sactuary as written. At 12th level, twice a day the priest can grant any creature in 10' a new saving throw against any and all negative affects presently afflicting it.

Ojhal is a virgin goddess, wearing a simple nun's habit with a peaceful expression, usually depicted with four or more arms and sitting on her knees. Three of her hands are open, with the last bearing a shepherd's crook. A goddess of peace and protection, Ojhal is nevertheless a capable warrior. Even in the thick of battle, her face has never betrayed anything but deepest serenity.

The symbol of Ojhal consists of four curling arms radiating clockwise from its centre. On the symbol are balanced three rings representing thoughts on the past, concentration about the present and consideration of the future. The symbol is prevalent in temples where it must never be obscured.

Originally worshiped in ILCAR, worshipers were primarily celibate monks and ascetics who sacrifice earthly pleasures in favor of a contemplative existence. They strive for the balance of mind, body and spirit in life, and are remarkably calm even in the midst of chaos. Her temples were favored by the agitated, conflicted, redeemed evildoers, retired warriors, strayed paladins, even some penitent old warlords. When the worship of Ojhal was proscribed by Ilcar's emperor, a group of monks fled south to YOROS, and founded a new monastery in the wastelands of IZDREL. From there, missionaries brought Ojhal to ULLOTROI where she has become wildly popular. The ULLOTROI have rededicated to the Virgin Goddess many old ceremonies and traditions formerly consecrated to HISH-YIGGERA.

“I am Uldor, the abbot of Puthuum. More than a thousand years ago I came with my monks to Yoros from Ilcar, the black empire of the north. The emperor of Ilcar had driven us forth, for our cult of celibacy, our worship of the maiden goddess Ojhal, were hateful to him.”—The Black Abbot of Puthuum, CAS 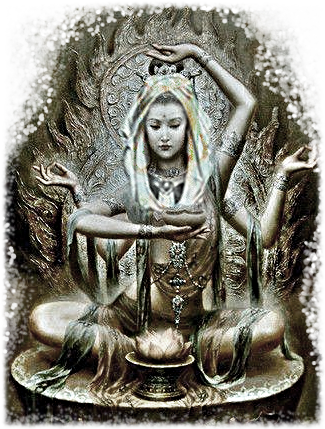