The Rajadhirajas, The Twin Blasphemies

The Twin Blasphemies are of impure blood and flame personified, blood spilt of no sane beast and flame as black and cold as the depths of space. They are naturally formless, oozing, boiling, roiling red mass of proto-matter, throbbing orbs, whirling pseudopods, sucking orifices, and various non-Euclidean forms. They can take on any kind of form they wish, though, and usually assume the properties of myriad beasts at once, together with alien things and natures that are not altogether real. Their cobbled-together masses, when first seen, oft drive their victims insane. The Twins are said to be the offspring of the Outer Gods, and in turn have given birth to several of the Old Ones—so sayeth the Parchments of Pnom.

The Radadhirajas are always worshiped together, their shrines bearing the yin-yang symbol, implying that the two beings may represent cosmic opposites of some sort. Other texts refer to Nug and Yeb as the creator and keeper. Their rites are especially abhorrent, relished by the skinchangers and were-creatures who idolize them. These terrible beings believe that they will inherit the remnants of Earth once humanity has been scoured from it.

Nug has gained great knowledge and power of magical sort, and of the Twins is especially favored by cultists. It teaches its sorceries to magi who summon it for pacts and power. It trades magical knowledge and use of its powers for the still-beating hearts of human sacrifices, the more innocent, the better. If Nug consumes a heart as it is still beating, it consumes the soul of the sacrifice. It then might regurgitate the soul into a rakshasa; a twisted and cruel spirit being with a beast's head. Yug on the other hand has no mastery of magic and no command of potent powers of its own. It is thus favored only by cults and mad priests who gain their power from the essence of Chaos itself. Yug is readily summoned, however, answering to the prolonged suffering of innocents in its name. The main purpose for doing so (beyond impressing the cult minions) is it's ability to create ravening chimæra or beast-men with its bilious fluids, control of which defaults to Yeb's high priests.

O Great Hammers of the Scouring, arrive with thy Black Fires wild,
Clearing all spaces for the Terrible Masters Outside deprived.
Nug and Yeb, Great Dragons black and red, come prepare thy Fathers' table!
—The Black Litany of Nug and Yeb (from The Book of Eibon), Joseph S. Pulver, Sr. 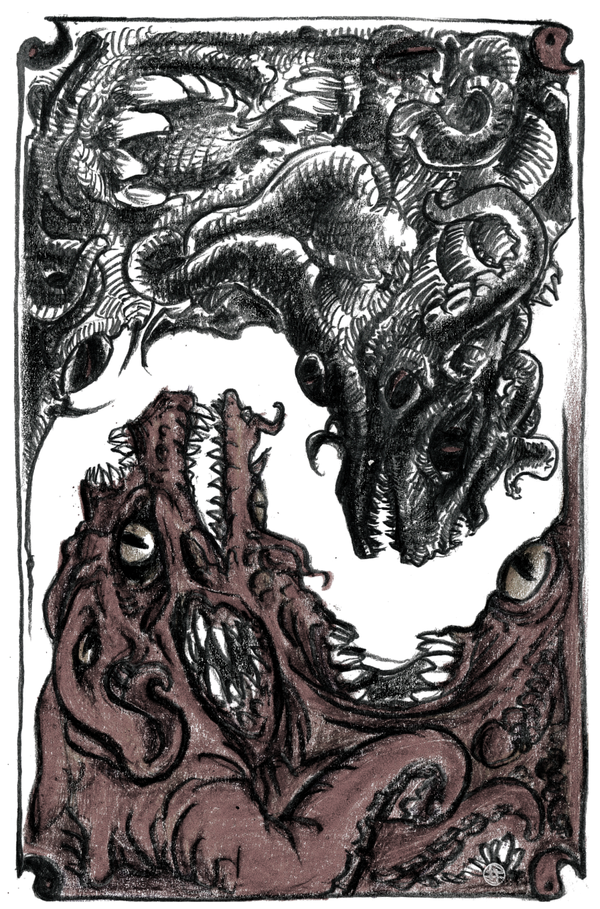 Nug and Yeb, the Twin Blasphemies
by Astanael