Goddess of Twilight; Mistress of Near Dark; the Mother Crone; Keeper of Secrets

Nhebeqa is the mysterious goddess of the twilight, witchery, fog, secrets, and precipices. She stands 7 feet tall, and most often appears amid two to five mirror images of herself, each holding a snake, dagger, or torch. Raven hair compliments the Goddess's livid, olive skin. Sometimes, her duplicates possess the heads of dogs, snakes, asses, rooks, or toads; animals that the Mistress of Near Dark is fond of. Nhebeqa's flowing gown of twinkling shadows obscures her, except beneath the light of a bright moon.

She is a widely worshiped goddess and the patron saint of those who live on the fringes. She watches those whom hover between various states of existence—life/death, consciousness/dream, order/chaos. To witches, Nhebeqa is the Mother Crone, inspiring women to secure their liberty through the Cræft. Others seeking the cover of night often invoke her name; thieves, psychonauts, prostitutes, and clandestine lovers. In spite of the Goddess of Twilight's popularity, few are her temples—but many are her shrines. At crossroads, her altars appear only in certain light, at specific viewpoints; or by brushing away the natural foliage. In households, Nhebeqa's shrines are hidden away in attics or cellars. Black female puppies and young jennies are offered to her by those who desire protection from nocturnal evils. Nhebeqa is fêted by vampires since it is believed she aided in their creation and they are her children. Reluctant vampires, new to their condition, implore her, for legend has it that Nhebeqa's creation of them was not her choice. Ghosts, specters, and restless spirits that linger between life and death fall within Nhebeqa's purview, though she has no commitment to helping these cross over.

Nhebeqa communicates primarily through omens or proxies. Because of this she is also known as the Keeper of Secrets. Lovers whisper their secrets to her, witches tell her where their sabbats are, thieves plot their crimes to her, vampires speak the names of their victims, all knowing that their secrets are safe. A saying has even taken root among those aware of her—"Nhebeqa knows," meaning no one else knows.

"Hekate Einodia, Trioditis, lovely dame, of earthly, watery, and celestial frame, sepulchral, in a saffron veil arrayed, pleased with dark ghosts that wander through the shade;
Perseis, solitary goddess, hail! The world's key-bearer, never doomed to fail; in stags rejoicing, huntress, nightly seen, and drawn by bulls, unconquerable queen;
Leader, Nymphe, nurse, on mountains wandering, hear the suppliants who with holy rites thy power revere, and to the herdsman with a favouring mind draw near."
—Orphic Hymn 1 to Hecate, c. 3rd B.C. to 2nd A.D. 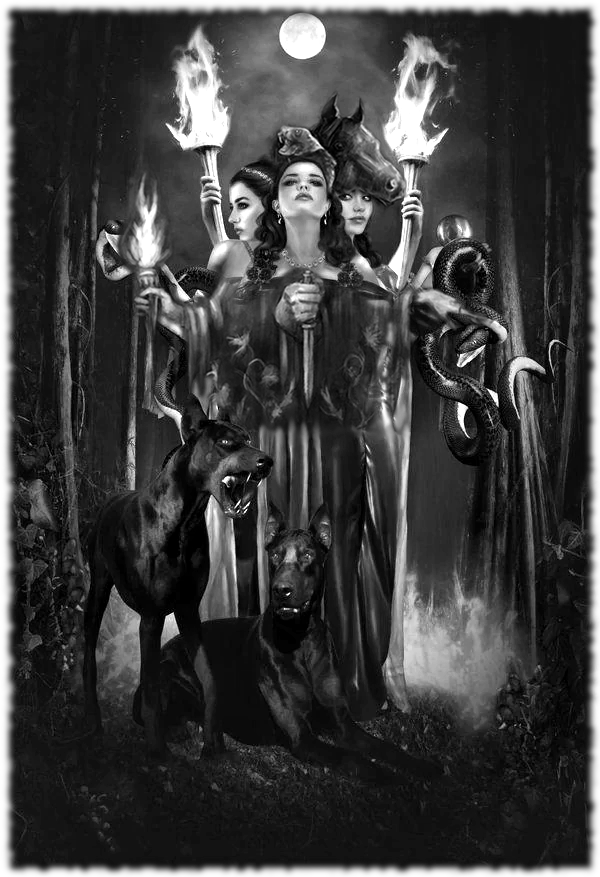