Lawful
Domains: Ancestors, honor, heroism, nobility, legend, light, the sun, swordplay, protection
Favored Weapon: Khanda (bastard sword)
Symbol: Khanda in front of the sun
Worshipers: Soldiers, crusaders, paladins, nobles
Priestly Boon: At 1st level, receive a +1 bonus to hit and damage with daggers in mêlée only. At 12th level, may continue to fight or function at negative hit points, but may only act in Phase 1 or 2, not both, and is reduced to ½ normal movement. Once reduced in hit points to the point where he'd be killed, the priest dies as normal.

The King of Kings, The Unvanquished, The Master of Swordplay

Namaguru is the god of the sun, honor, ancestors, and swordplay. As he holds swordplay in his portfolio, Namaguru is also the patron of noble and honorable swordsmen and women. Namaguru is a turbaned and mustachioed human in appearance but, in art, he is sometimes represented as a golden carp, or some combination thereof.

Namaguru's worship is most significant in USTAIM. His faith is particularly strong in ARAMOAM, where there are impressive statues of Namaguru some 250 feet tall, guarding the entrances to the city and waterfront. Emperor VATAPUAK claimed to be his mortal descendant, albeit separated by 296 generations; to this day the emperors of Ustaim revere Namaguru as their divine ancestor.

The followers of Namaguru strive to lead virtuous lives and, by their example, inspire virtue in others. Worshipers tend to be devout and strict in their practice of dress, music, meditation, and dietary regimens. In recognition of the divinity's portfolio, the church teaches people to respect their ancestors; it also teaches honor in sword fighting. Adherents remain armed with (at least) a kirpan (curved dagger) at all times, and in fact are proscribed from relinquishing it. Despite this militaristic element to the faith, Namaguru's warriors do not seek out battle, but hope for peaceful times. The paladins of Namaguru are warriors who serve just lords, peacekeepers who oppose banditry, and those who advocate for honored ancestors. They are steadfast in the face of death; when a great hero falls, these dedicated paladins celebrate that individual's union with the King of Kings.

"There is hardly a mode of torture which the Sikhs have not suffered, and not one has cried in pain or relented."—Baba Deep Singh 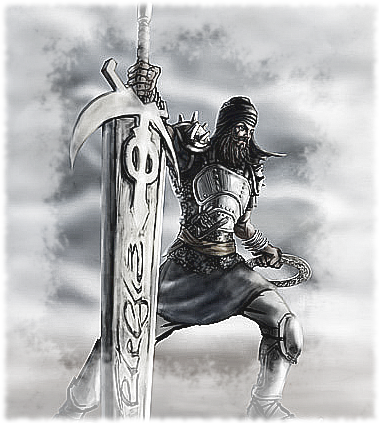