Silent as a cloud shadow drifting over the peaks, suddenly given the bone crushing physicality of an avalanche with the furor of a mountain storm; this is Muong Utan, the Dweller in the High Places. Muong Utan appears as a monstrous, bipedal, bestial, anthropoid covered in a matted white coat. He wears beads and bones braided into his fur and has great bronze bracers on his forearms. He stands 15' tall, with his massive arms dragging the ground much like an ape.

Muong Utan is rarely seen but his cries are often reported by travelers in lofty mountain passes. Believers say those that fail to present him tribute are subject to being victims of falls from great heights or crushed by landslide. For this reason, many pay him obeisance, even if he they don't worship him outright and has no formal temples or churches. His most common devotees are ascetic monks, who make their home in the mountains. From their high upland perches, they take a detached view of the problems of civilization, preferring solitude and the grandeur of the wilderness. Many highland barbarians and feral hillmen also invoke Muong Utan's protection when they witness an avalanche or feel the first cold of winter.

Muong Utan wanders the high peaks and is constantly on the move through the high passes and crevasses. Mountaineers and mountain guides sometimes describe him reveling in the fierce storms that embrace the high peaks, banging his great axe in time with the thunderclaps. Mong Utan is reclusive and there few accounts of any who have encountered him and survived to tell the tale.

The most curious figure in the Lepcha pantheon is Chu Mung, the 'Glacier Spirit,' an apelike creature. This is no other than the mysterious Yeti, or 'Snowman,' of the Sherpas and Tibetans. The Lepchas worship the Glacier Spirit as the god of hunting and lord of all forest beasts. Appropriate offerings have to be made to him before and after the chase, and many Lepcha hunters claim to have met the Glacier Spirit during expeditions on the edge of the moraine fields."—Where the Gods Are Mountains: Three Years among the People of the Himalayas, René von Nebesky-Wojkowitz. 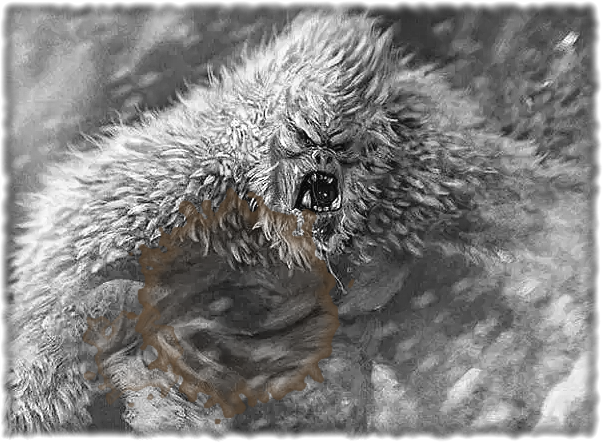