In ancient times, Mordiggian was the god of ghouls, yet as these undead spread throughout the countless worlds, many of them lost their way and fell into decadence. The greatest of those ghouls who have not degenerated maintain the Charnel God's ancient rites. Mordiggian is a cloud of ghostly darkness, capable of congealing and coalescing all or portions of his form to serve his needs. He can create a long, grasping limb to pluck a ripened morsel from a coffin-platter; or take the shape of a giant humanoid to visit his wrath upon those who dare to tread upon halls where only the dead may walk. The Charnel God’s favored form is colossal swirling worm or humanoid of smoky, tentacle-coiled shadow, old and broken human remains floating amid his maggoty mass, paradoxically dazzling and devoid of all light.

Mordiggian’s lay worshipers in the modern era are humans who venerate him as a death god, yet to the untrained eye, these men and women are little more than ghouls themselves. Using vile rituals and surgical practices, they transform their limbs and visages into ghoulish countenances. In cities where such grotesqueries would cause incident, his worshipers wear heavy cloaks and silver masks to hide their shapes. Mordiggian’s temples are grand mausoleum-cathedrals placed in positions of prominence in their cities. Cities that host such temples have no graveyards of their own, for the hierophants of Mordiggian collect the bodies of the dead and place them, free of charge, into their sacred vaults for “disposal.” As such, undead and corpse-borne disease are rare contagions in cities under Mordiggian’s care, yet sometimes his priests are too eager in gathering the “dead,” and have been known to take away those in comas or deathlike trances from which they could have recovered.

The Charnel God is worshiped rarely as famously as in the city of ZUL-BHA-SAIR, where his low, windowless temple is found in the city center. All those who die within the city are his rightful property, and are delivered to his temple in the care of his semi-bestial priests, where, it is said, the god devours them. These priests are always clad in midnight vestments, their faces hidden by silver masks in the shape of scarabs with human skulls for shells.

"‘Mordiggian is the god of Zul-Bha-Sair,’ said the innkeeper with unctuous solemnity. ‘He has been the god from years that are lost to man’s memory in shadow deeper than the subterranes of his black temple. There is no other god in Zul-Bha-Sair. And all who die within the walls of the city are sacred to Mordiggian. Even the kings and the optimates, at death, are delivered into the hands of his muffled priests. It is the law and the custom.’" —The Charnel God, CAS 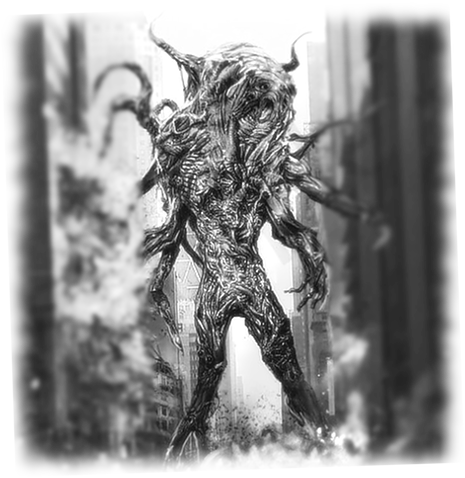