God of Victory, Lawgiver, Lord of Pure Incantations, The God Who Decrees

Merukaad appears as a giant humanoid with a bushy beard, wearing a kilt and a horned helmet. He possesses four eyes, four arms, flames shoot from his mouth when he speaks, and there's a reddish tinge to his skin. He rides a chariot pulled by a quartet of horses, accompanied by a platinum wyrm called Sirrush, and carries a shortbow and scepter.

Merukaad is one of the NEUNNAKI, a family of deities present at the dawn of the second civilization. He is said to have once extorted from the older neunnaki the position of chief god by promising to bestow order upon the cosmos. Merukaad's created the heavens and the Earth from the dismembered body of the HISH-YIGGERA, whom he defeated. After which, Merukaad regulated the workings of the world and included humanity as assistants to the gods against the forces of chaos. Henceforth, Merukaad decreed, humans would do the work which the gods have no time for, freeing the divinities to concentrate on higher purposes and care for human needs. When the neunnaki returned to Zothique sometime during the last cataclysm, ILILOT, who presently possesses more temporal power in the form of worship and disciples, superseded Merukaad's lordship.

Merukaad demands that his followers abide by a harsh code of conduct. Above all else, this means living honorably by obeying and enforcing the rule of law. The warrior-priests of Merukaad work as missionaries to bring law and order to barbarous lands across Zothique, destroying monsters and taming the wilderness. They wear a habit of golden thread embossing depicting strange geometric shapes. High-ranking clerics and paladins wear gold-horned miters. Secular authorities often consider them a useful asset for controlling the population.

"At the mention of his name, let us show submission!
When he speaks, let the gods heed him,
Let his command be superior in upper and lower regions.
May the son, our avenger, be exalted,
Let his lordship be superior and himself without rival.
Let him shepherd the black-heads, his creatures,
Let them tell of his character to future days without forgetting."
—Enûma Eliš 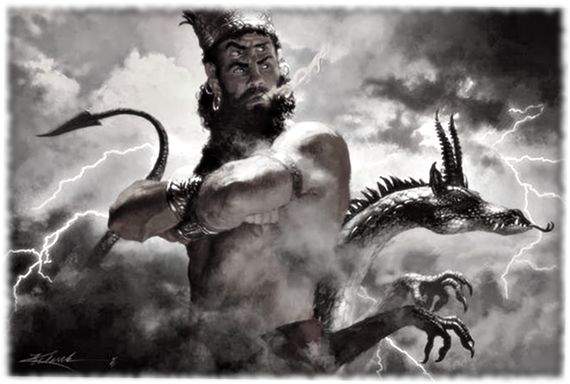