The ancient demon-god of the recrudescent snake-men, Hish-yiggera is the dark mother of various ophidian races and a master of sorcery, particularly vivimancy and transmutive magic. Hish-yiggera presents as a giant beheaded woman wearing a skirt of writhing snakes and a necklace made of human hearts, hands, and skulls. Claws adorn her feet and hands and her breasts hang flaccid from eternal pregnancy. Some legends say that Hish-yiggera bore the NEUNNAKI gods, but was betrayed and beheaded by her own family when they decided they were too crowded. The Severed Goddess wasn't yet finished, and now two enormous serpents spurt forth from her beheaded neck. When they turn and touch snout-to-snout, Hish-yiggera's face appears in their profiles.

Snake Woman enjoyed global worship in the ancient world, when the last serpent-men taught the first humans the secrets of sorcery and prayer. Her fame has waxed and waned, but she has never been forgotten.

Most artistic representations of Hish-yiggera emphasize her deadly side, a mother, yes, and an insatiable monster that consumes everything that lives. She represents the devouring mother, in whom both the womb and the grave exist. She births chimeræ, hydras, and other multi-headed horrors; but loves them all and teaches her children how craft new lifeforms from those extant. Though the snake-men themselves are rare today, Hish-yiggera has no shortage of worshipers. Cults of Hish-yiggera lair in ancient temples, with pits filled with squirming serpents, giant slithering temple snakes, malachite altars stained with the blood of centuries of sacrifice, and hydra-guarded vaults wherein lie hidden the papyri of the snake-men.

"In all mythological language the snake is an emblem of immortality: its endless figure when its tail is inserted in its mouth, and the annual renewal of its skin and vigour, afford symbols of continued youth and eternity; and its supposed medicinal or life-preserving qualities may also have contributed to the fabled honours of the serpent tribe."—Ophiolatreia, Anonymous 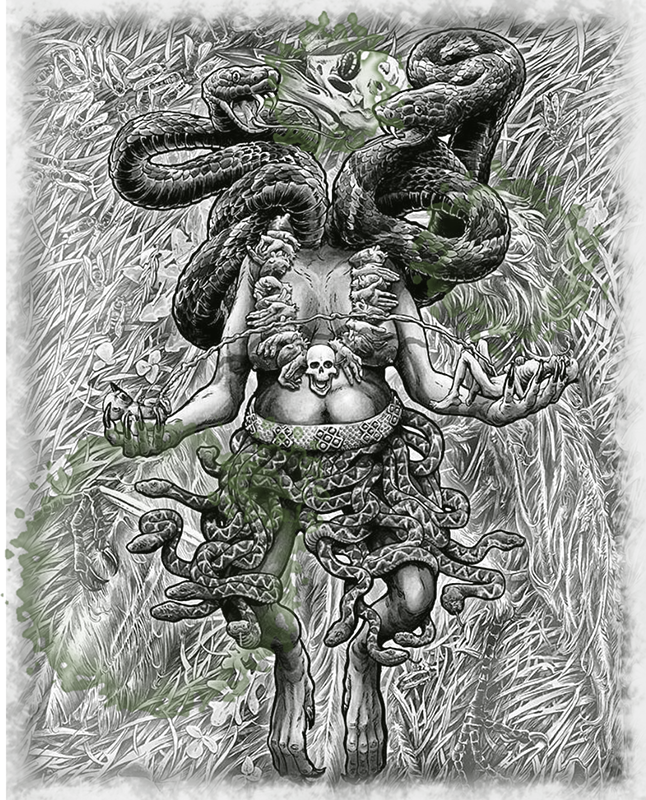