Lord of the Volcano, The Beast of Apocalypse, Destroyer of Worlds

Ghatanozoa’s form is said to be particularly horrific, resembling a combination of various nautiloids, ammonites and other sea creatures, with an upside-down shark's head. The merest glance is enough to transform the foolish viewer instantly into a desiccated, living mummy capable of observing the world and feeling the endless passage of time, but incapable of moving or otherwise interacting with the world. This form of immortality is said to be among the most horrific fates a mortal mind could endure.

The king of colossi, Ghatanozoa is responsible for the annihilation of the ancient humans that roamed the planet millions of years ago, having surfaced from the mythical city of R'LYEH. After covering the world with perpetual darkness, Ghatanozoa's reign of terror affected all life on the planet. But when the age of darkness neared its end, Ghatanozoa, along with its monstrous followers (called lloigor) went into the ancient city of R'lyeh island and hibernated for a time. Ghatanozoa has awoken numerous times across the ages, apocalypse in his wake.

The Destroyer’s insane worshipers are said to be able to raise islands on distant worlds from unknown oceans that serve as portals between Ghatanozoa and new vistas to conquer.

"There were always those who believed that sacrifices must be made to Ghatanothoa, lest it crawl out of its hidden abysses and waddle horribly through the world of men as it had once waddled through the primal world of the Yuggoth-spawn."—Out of the Aeons, H. P. Lovecraft and Hazel Heald 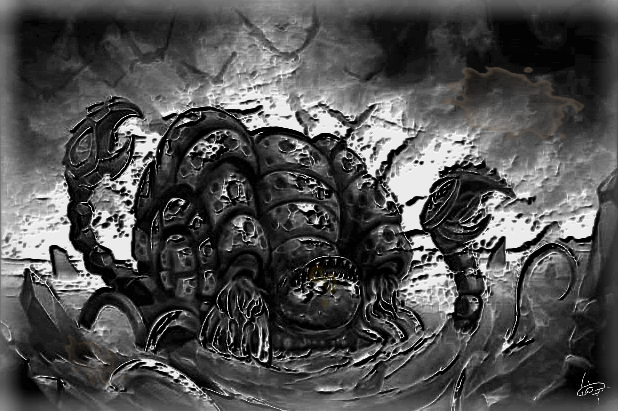