The Lord of Luck, The Fool Dreamer, The Careless God

Figurines of this god depict Geol as a stylistically deformed, ithyphallic, pot-bellied figure, lying supine and staring into the heavens with a big imbecilic smile. Originally an earth and fertility god, Geol is now the god of hedonism, escapism, and luck.

Many swear “For Geol's lot!” when they need a bit of luck, because Geol has no troubles. A popular custom is to rub the Fool Dreamer's belly for good fortune. Gamblers often keep a figurine of the god. To ensure the conception of strong sons, it is traditional in many lands for the newly married to keep a shrine in their home. As one who promotes joy, Geol scares demons away from houses, so his statue is oft put up as a protector. Since he drives off evil, Geol symbolizes the good things in life—music, food, drugs, alcohol, and sex.

Followers tend to be wantons, avid consumers of opiates, hallucinogens, and alcohol, and players of games of chance. Organized worship of Geol is centered in northeastern Zothique, in the realm of USTAIM. He is the secondary deity of the capital city of ARAMOAM, where his chief temple is, but even there his worship is lax. Clerics are usually content to collect oblations and do little to promote expansion. Worshipers in the Temple of Geol can sometimes hear the audible prophecies of the god emanating from the navel of the idol. These oracles are deemed to be infallible.

Some shrines abroad to the Fool Dreamer are merely fronts for thieves' guilds or dens of vice.

"Alone, with bare head and unshod feet, as was ordained by hierarchal law, he entered the dim adytum where the image of Geol, pot-bellied, and wrought of earth-brown faience, reclined eternally on its back and regarded the motes in a narrow beam of sunlight from the slotted wall. And, falling prone in the dust that had gathered around the idol through ages, the king gave homage to Geol, and implored an oracle to illuminate and guide him in his need. And after an interim, a voice issued from the god's navel, as if a subterrene rumbling had become articulate."—The Voyage of King Euvoran, CAS 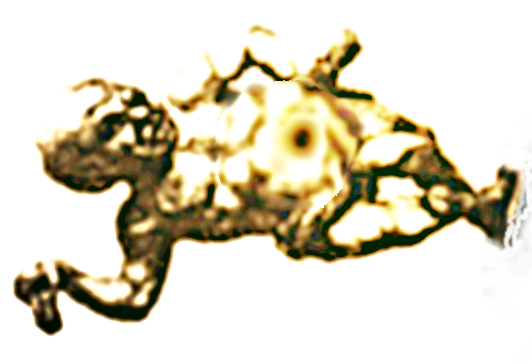