The Elephant God, The Horror of the Hills

Chaugnar Faugn is often called the Elephant God, but only superficially resembles an elephant. This alien abomination combines the worst elements of elephant, leech, and octopus. He has winglike veined ears, enormous curved tusks of jagged gypsum, and a vermiform proboscis that ends in a toothsome sucker. Through this trunk Chaugnar Faugn drains the blood of those who draw too near. The entity is ancient beyond imagining, a creature capable of existing in more dimensions than most could even guess at and surviving over epochs of time that birth and destroy worlds.

Traveling eons ago from an alternate dimension (possibly in another form), upon his arrival in the Carboniferous age, he found fanged amphibians to be the largest and most complex organisms. From these, he created the MIRI-NIGRI as his servitors. It is the miri-nigri who, ages later, mated with early man to produce the degenerate Tcho-Tcho people, who persist even to the present. Perhaps amused by his passing resemblance to natural proboscideans, the Elephant God encourages their use as war beasts, "enhancing" them with granitic skins and a lust for blood.

Although the appearance of Chaugnar Faugn is disturbing and perverse, and his sensibilities as malign as a gorgon, he nonetheless exudes a buddhic calm. In fact, when he is ‘dormant’, his skin is so stone-like and his demeanor so still, that he appears as a statue (from a casual glance of the god while dormant, it is impossible to discern the difference between a statue or idol of Chaugnar Faugn and the god himself). When Chaugnar Faugn “awakens”, he does so to drink the blood of his devotees through means of his leech-like “trunk.”

Chaugnar Faugn’s faithful adopt the Great Old One’s patience. They are violent and eager for blood, true, yet they wait generations before acting on plans for vengeance or raids. Many times, the cultists’ enemies have believed them to have been exterminated after a brutal conflict, but each and every time, this is a misconception. The worshipers of The Horror were merely content to wait for a proper chance at revenge. In those rare occasions when Chaugnar Faugn does wake, though, worship does nothing to deter his hunger; he feeds on zealots and unbelievers with equal disdain.

"I am very old, oh man of the waste countries; long and long ago I came to this planet with others of my world, from the green planet Yag, which circles for ever in the outer fringe of this universe. We swept through space on mighty wings that drove us through the cosmos quicker than light, because we had warred with the kings of Yag and were defeated and outcast. But we could never return, for on earth our wings withered from our shoulders. Here we abode apart from earthly life. We fought the strange and terrible forms of life which then walked the earth, so that we became feared, and were not molested in the dim jungles of the east, where we had our abode."—The Tower of the Elephant, Robert E Howard 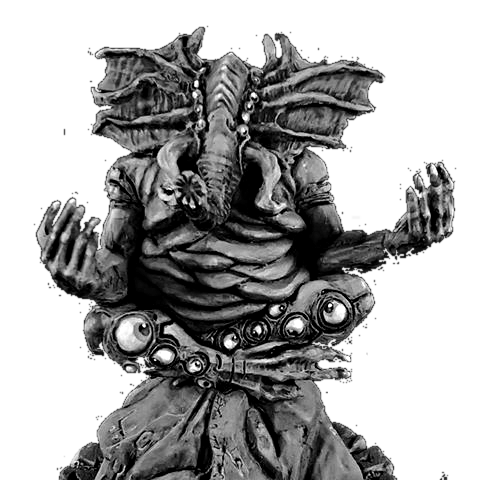