The world itself, in the end, shall be turned to a round cipher.—Old prophecy of Zothique

We can't make out a exact timeline for ZOTHIQUE. The stories don't cover events in sequence and take place over a span of many thousands of years. Realms rise and fall and their people rebuild in an endless cycle. To the minds of it's inhabitants, concerns of day-to-day survival far outstrip matters of world history. For adventurers, archeological inquiry tends to be limited to "what can kill us in these ruins?" Whether an event took place before or after the calamities that punctuate the series is a matter of conjecture.

The oldest of the kingdoms of which myth tells is that of OSSARU, the wizard-king who, together with the extraterrestrial monster NIOTH KORGHAI, ruled half of Zothique. Ossaru's extravagant capitol is lost, somewhere, but remnants of its alien architecture fleck the landscape. If there are ruins older than Ossaru still extant, such as those that might be recognized by a person from the 21st century, awesome magic must be sustaining them.

After Ossaru rose the Empire of CINCOR, which lasted a few thousand years, from its first emperor, HESTAIYON, to ILLEIRO, last of the NIMBOTH dynasty. From the capitol of YETHLYREOM, Cincor demanded and received tribute from the four corners of Zothique. Illeiro and most of its citizenry perished in a spell-plague, and Cincor remains a blighted and deserted waste. Only recently have Cincorans, descendants of those who survived in the benighted caverns of the MYKRASIAN MOUNTAINS, emerged to truck with their former subjects.

Overlapping with Nimboth, Pharaoh TNEPREEZ founded the kingdom of TASUUN. The fifty-ninth Pharaoh of Tasuun, FAMORGH, surpassed the others in luxury, and during his reign Tasuun stretched as far east as ZYRA and ZHEL. Late in Famorgh's lengthy rule an earthquake leveled the capitol of MIRAAB. Withal, his son MANDOR came to power, though the kingdom lost control of its eastern territories. Now, warlords, cults and worse fortify themselves within the abandoned settlements of what was eastern Tasuun, upsetting trade, tipping the balance of power, and forcing surrounding domains to consider their options.

This campaign takes place roughly two-and-a-half millennia after the plague that befell Cincor. It is less than a full generation following the earthquake that destroyed Miraab, but well into the city's reconstruction. The most powerful and unified state in the world is XYLAC, far to the northwest, its emperors notorious for their pomp and cruelty. A wicked boy-emperor named ZOTULLA rules from UMMAOS, the decadent capitol.

Our tale begins in Zhel where the elder gods, the NEUNNAKI, are returned from the stars to reclaim their golden thrones, pursue old agendas, and renew old feuds. This their second coming has lasted almost three hundred years, and now their eyes look abroad as their respective city-states' coffers dwindle. Rumors of recrudescent SNAKE-MEN, never before seen in this age, fuel local paranoia and inflame persecutions that consume guilty and innocent alike. Just south of Zhel are the continent's central deserts, where anarchy reigns, and opportunities abound for those brazen enough to seek them. 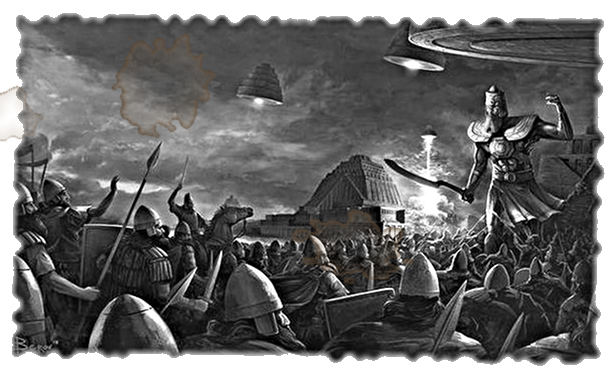